The American Legion is turning 100 and Samuel Burney Post 441 is joining in the celebration.  According to available records, Post 441 came into existence in 1939, was incorporated May 11, 1949 and received its national charter July 27, 1950.

Our Post as a whole traces its roots to March 15-17, 1919 in Paris, France during the aftermath of World War 1.   The American Legion was officially chartered September 16, 1919 and quickly became an influential force  at the national, state and local levels, dedicated to service to veterans, strong national defense, youth and patriotism.

Within a year, The American Legion had chartered more than 5,400 local posts that continue to operate today.  It now has more than 13,000 posts throughout the world and more than 2.2 million members. Throughout its first century, the American Legion has built a legacy on such accomplishments as leading the way to create the U.S. Flag Code, helping to start the Veterans Administration, drafting and getting passed the Servicemen’s Readjustment Act of 1944, (the G.I. Bill), which transformed America in the second half of the 20th century, and helping veterans receive benefits for health-care conditions based on their honorable service, including acceptance of Agent Orange exposure as being service-connected.

The Department of California held an organization meeting in San Francisco at Post 1 on October 10-12, 1919.  The first Department Convention was then held on August 23-26, 1920.  The American Legion’s success depends entirely on active membership, participation and volunteerism. The organization belongs to the people it serves and the communities in which it thrives.

Post 441 is named for Samuel Burney, a trapper, guide and caretaker who was killed by local Indians in 1857.   The original Board of Directors included: Dudley Andre, T.R Cook, Gavin Huggins, Jack Johnson, Joseph Lawson, H.K. Ludington and Delray Toland.  Post 441 currently has  55 members. 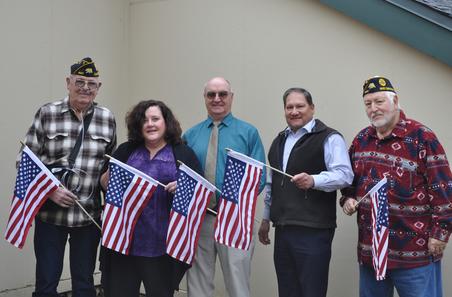